Friday Cat Blogging - Boy, will my cats be pissed! 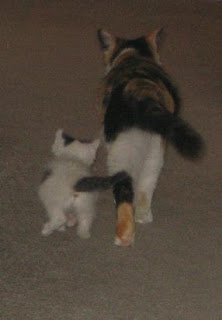 A friend of mine has five cats. Two of the cats had kittens. The first one had one kitten, then the second had four. Since that made ten cats, in all, I told her I would take one. She gave away the first kitten, already, because it was older than the second batch. That still leaves her with nine cats. When she told me what colors they were, I told her I would take the white-with-black-ears-kitten. The first pictures she showed me were of a very ugly little kitten, of course, the kitten was only about four weeks old, at the time.

Last weekend, I took my camera with me when I visited the kitten. In the picture above, the kitten is walking with mom. I thought that was a cute picture. 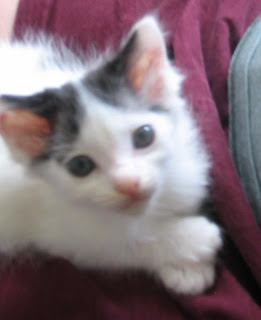 I think she's looking pretty cute, now. She's about six weeks old. My friend told me I wouldn't be able to take her home until she's about ten weeks old. Boy, will my other cats be pissed! Especially the Princess! In fact, while we were viewing what pictures to post for FCB, Grey Feather was sitting on my lap. All of a sudden, she turned and gave me a really odd look, then she jumped down. It's as though she was really looking at the pictures. I wonder...