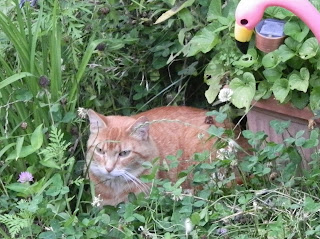 It's taken me a while to feel like writing about it.

The Labor Day holiday weekend started off rocky. I couldn't immediately find Orangecat. The previous weekend, she was gone until Sunday, but appeared after the neighbors left. I wondered if she had been hanging out with them. She didn't seem to have much of an appetite, but I wasn't worried - she was an outside cat, after all. She was known to catch and eat mice, so she would have a good food source.

The worry started when she disappeared Wednesday. The neighbors came back. I decided to go ask them, on Friday, if they'd seen her, if she hadn't come back by then.

I called her name all the way over to the neighbors' place. When I asked if they had seen her, they said they hadn't and agreed to let me know if they did. I called all the way back to my place. As I was coming back up the drive, she wobbled into view. I couldn't determine what was wrong with her. She seemed so tired, so I figured the kids next door might have been playing with her. I put her in the large animal carrier for the night, so I could keep an eye on her. The next morning, I could see that she had taken a drink and used the litter box, but hadn't eaten any of the wet cat food.

I called her vet, but they were too busy to take another case. So, I brought her inside, tried to tempt her to eat Fancy Feast. She has been known to eat dog food, so I went to the nearest store and picked up a couple different types of dog food and cat food. She wouldn't eat. I blocked the kitchen, and allowed her the run of it. She just layed there on the towel. At one point, she wobbled over to the door, and lay there, panting.

Fateful Sunday, I cooked an egg and mashed it, added some water and tried feeding her. She swallowed some of it, but wouldn't eat on her own. We drove to the store and got some baby food. After getting very little down her, I called a different vet clinic. The on-call vet told me that there would be an additional Emergency/after hours fee, and agreed to meet me at the clinic.

First thing the vet said was, "oh, she's so pale, she's probably losing blood somewhere." I found out she was looking at kitty's gums. They were almost white. Doc asked me if Orangecat had been checked for leukemia and FIV.

Orangecat had Feline Leukemia shots, so she shouldn't have that. Doc took a sample of blood. It was clear like cherry koolaid. Unfortunately, for my poor kitty, she was diagnosed with FIV. The vet said that there wasn't anything they could do, unless I really wanted to take her to the vet school for a transfusion. It would have been about $1000, and her future time would be iffy. Doc give her the final shot. I brought her home, and buried her.

Adding to the depression... Doc said that the way FIV is passed on is through the mom (very rarely) or through cat bites - usually stray tom cats. Who does that sound like? DanDLion was a stray tom cat. He was a horrible cat. He chased and bit the girl cats. Grey Feather got out one day, and he almost killed her. Both she and Orangecat loathed him, even after he was fixed. So, now I have to decide, do I want to have DanDLion, Midnight, and Grey Feather checked for FIV? Do I want to know? The only cat that still bites, sometimes, is DanDLion. He keeps opossums, raccoons, and stray cats away, he also kills lots of mice. I guess (when the cats have to get shots) I will have the doc check them for FIV.

Anyway, I was too depressed to write anything, and this is the reason why.

Our thoughts are with you.

Dang. That sucks. One reason why my guys have always been indoors cats is to keep them safe from that kinda stuff, but that's easier to do with only two. (Well, only one now that Mencken has taken the final trip due to cancer, sigh).

Condolences, OWL. It is always hard to say good bye to a friend, and worse when the cause is to a disease that might affect others.

Steve - Thank you for your kind words and thoughts! I really appreciate it.

BadTux - Thank you. How right you are! I'm sorry about Mencken. It's always difficult to lose our dear kitties.

Bryan - Thank you - Yes, it was depressing, and shocking! I'm sure hoping the rest of them are negative. After reading up on it, I found that many cats (positive for FIV) live long and healthy lives.

So sorry to read about Orangecat's passing. My condolences.

worse when the cause is to a disease that might affect others.