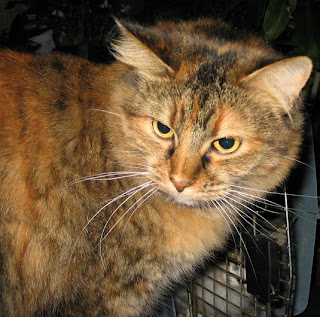 The week before last, I posted a picture of Lady Fortuna in her pet taxi. To get that picture, I had to take several pictures because sweet kitties, such as today's featured Friday Cat Blogging model, Rocky Girl, think they should get all the attention.

So, my kitties wanted me to tell the story about my car. The story starts in August or September of 2007. I took my car to a fixit place, we'll call this one "X", to see why it was making more noise than usual. They checked it out and told me I needed a catalytic converter. They would have to order one, and the price would be about $900 total. I told them to go ahead and order it. They had me pretty convinced I needed one. The next day, I called my favorite fixit place, "Y", and asked them how much it would cost to replace. They said they could have the part overnight expressed - and it would cost about $600, if I wanted to bring the car in the next day. I did. They installed it. The noise didn't go away.

About a week later, "X" left a message that the catalytic converter was in, and I could call to set an appointment to get it replaced. I feel bad about not calling "X" and telling them I already got it fixed.

I took my car back to "Y" and asked them to diagnose the noise. They said I needed motor mounts and it would cost about $400, but they couldn't fix it right away, and anyway, if I decided to replace the car, that was putting big money into it. The rep (who I really like and trust) said the car should be okay for a while without getting that fixed. So, I bought new tires, at "Z", for the winter.

I was thinking about the motor mounts when it came time to have my tires rotated. I asked "Z" if they fixed motor mounts. They said bring the car in and they'd take a look. They rotated the tires and told me I needed strut mounts and two new struts.

(My cousin and others have told me that my car could use new struts, so I figured that would be a good investment.) That cost about $600. The noise was still there, but since it didn't seem to be worsening, I forgot about it.

The other night, a different noise appeared. The next day, I took the car to "X" (they're closer than "Y", and they've been pretty good in the past). They advised me that the motor mounts had collapsed. I asked them to go ahead and replace. It ended up costing about $500. Finally, the problem seems to be fixed.