I was listening to NPR, on Friday, and there was a mention of a race course in Hong Kong. I think the place was called Happy Valley, or some such. Anyway, the guy on the radio said someone placed something, that would shoot darts into a horse, in the ground at the starting gate. They didn't know exactly what it was for, or who placed it there, but there was an ongoing investigation. I wonder if the darts were bad enough to hurt the horse. Otherwise, I could see it being a great panic inducer so the horse might run very quickly out of the gate. No telling how it might place, though, as sometimes they tire quicker when starting off so fast. I'm glad they found it before it was used!
********************************************
Today was the Coggin's testing clinic that we usually ride my sister's horses to. I've uploaded photos onto another blog, under the post title, Saturday Horse Tail, because this one is loading slowly. I think I've loaded too many photos this month. 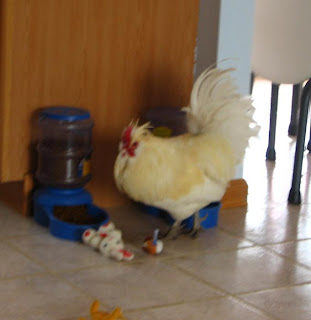 I was at my sister's and as we were sitting there, the door wide open, this rooster walked right in, to the cat dish, had a couple bites, crowed a bit, then walked back out. 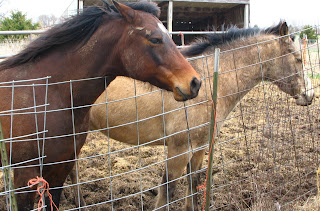 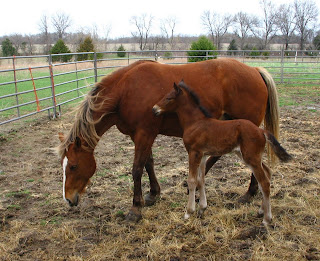 I figured you might enjoy a picture showing both. Millie (mom) was fine with my sister playing with the new baby. Sis was worried because my cousin and the guy(farrier)that shoes the horses, both have new foals, too, and told her stories of how they were not allowed (by their mares) to get near the foals. One was chased behind a tree. The other had to tie the mare, before he could get near the foal.

Well, how do you like that? There's a horse online dictionary! Amazing! 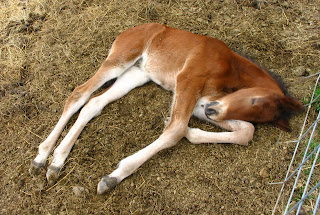 The little baby was taking a nap, when I showed up. Soon, he'll get used to having his picture taken, just as the other three horses, that live there, have gotten used to it. Now, it's hard to get a good distance shot, because they're all trying to get close to the camera-person.

My sister called to let me know that I'm an Aunt, again. Her horse, Millie, gave birth to a beautiful little boy. I was planning on going over to take baby pictures, and returning the Live Trap (used during the winter to catch Rocky Girl). I had the trap ready to go, already in the car... I was taking some stuff outside, and Rocky Girl was standing by the door. She was quicker than I. The trap is now, back outside, baited with tuna fish. At least the weather has turned nice and she won't freeze to death. 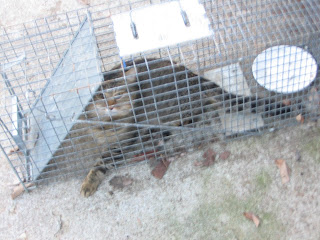 I guess I'll have to trap the other cats first. This is the same cat I trapped, first, back in November. 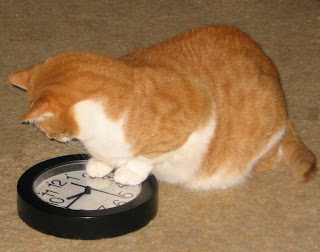 It's a little late for Sgt Mango to be concerned about Daylight Savings Time. Actually, I had to purchase a couple new clocks for two walls. I put them up and they make a slight snicking noise. Grey Feather was very excited about them, trying to knock them down so she could see what they were. I set the clock on the floor and the kitties had a great time, trying to catch the second hand. Sgt Mango kept on, even after the others lost interest.

I was reading the latest Cat Fancy magazine. An article entitled, Little Joe Lands, by Anthony Hall, tells about a cat shipped from Beirut to the United States:

He was found at 3 months of age, under-sized, hungry and blind. His lungs were full of dust, which is typical of pets in war zones, according to an American veterinarian.

I've always figured if war wasn't good for humans, it was even worse for animals. They're smaller and have no way of knowing what's happening. Poor creatures. They get caught in humans' wars, even though they have nothing to do with any part of it.

There is a groundhog that lives nearby, but it was keeping a low profile.

The day was pretty nice. However, the only swimmers were geese. Even these are wondering, "how cold is the water?"

I hope everyone had a great day!?! 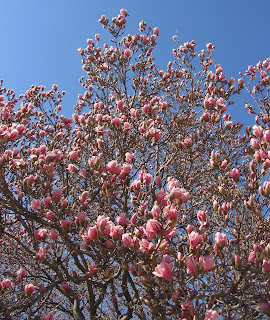 I admit it, I beat the six-year old. 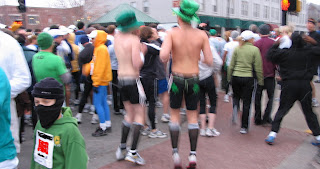 Start of the St. Patty's Day run. Brrrr. I guess those guys like the cold. It started snowing while we were waiting for the run to begin. 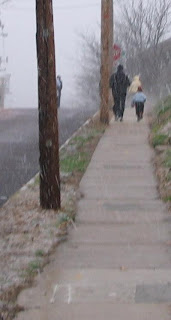 The kid up front is six years old. He was having a difficult time staying on task. He'd stop, and his dad would tell him, "come on, we'll be there soon". When I got up to them, I told the kid that he'd better watch it, or I'd beat him. He started running again, and they stayed ahead, for a little while, but when there was only .05 left to go, I passed them... and stayed ahead. Time for a nap. 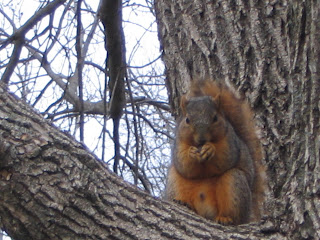 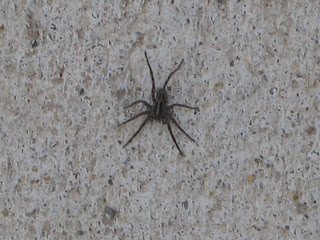 The cats dragged off one of their strings and have to find it. Standing in for them, this Friday, are two sweet friends. Meet Brownie and Wolfie. They were exercising at the park, when I dropped by. Sure, it looks like Brownie's having supper, but that one can run up a tree, pretty swiftly. We hope you have a great Friday!

***Brownie claimed to be a badger (Bryan - in comments - calls it a squirrel). I didn't think there were badgers in Missouri, but after talking to Brownie, I see them all over the place. As for Wolfie, she's either a brown recluse, a black widow, or a wolf spider. Incidentally, I don't recall reading that the wolf spider got it's name from those horrendous howls they make at night, especially when the moon is full. 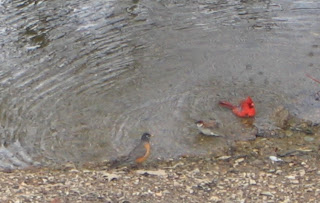 As we walked along the sidewalk, the bright red feathers caught my eye. "Stop!" I yelled at my friends. I started snapping pictures, until the Cardinal got tired of it, and flew away. I guess, in my excitement, I didn't hold the camera still enough. This was the best of the photos.

Can't see the forest for the trees. 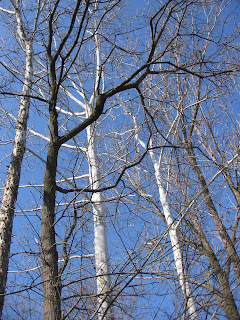 Yesterday, over in Columbia, the neo-Nazis marched downtown. It appears the haters are based out of Minneapolis. So, why are they coming to Missouri to spread their messages of hate? We already have enough haters. One of the posters said, "MISSOURI IS A WHITE STATE NOT BROWN". How the hell would they know? They don't live here. And anyway, most of us happen to like a "brown" Missouri. Luckily, it wasn't out of control, or anything. I guess they (police) arrested seven counter-demonstrators for minor charges. 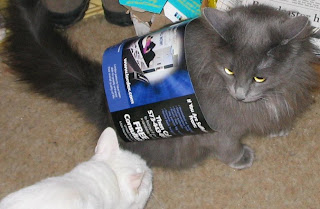 I opened up the paper to find out when Wild Hogs would be showing at the theatre. Junk fell out of the paper and landed on the floor. Grey Feather zoomed over, and the next thing I knew, this piece of paper was over her head. I got the camera and she moved away, so the paper fell, but still held on. She was not amused.

I did find out when the movie is showing, just haven't gotten over there to see it. Hopefully, I'll do that in the next couple days. Friends who have seen it, have all told me it's really good. 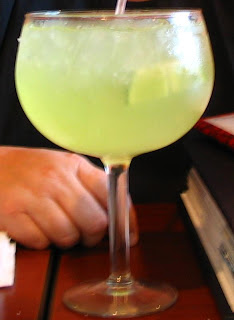 One was plenty. Good plentiful food and great friends. One of my friends had pictures of the cruise she took in January. She said she's going to try and get the rest of us to go, next time. Sounds like fun.

Getting out and about. 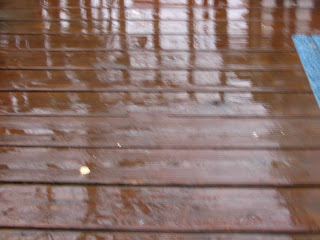 Ah, a nice clean deck. It wasn't so long ago that a thick layer of ice, with snow on top, lay there. I kept banging the door on the ice, because I couldn't dislodge it. No problems with that, now!:) I'm not going to think it's smooth sailing from here on out to summer, but it is great to have a nice day or two!

The littlest flowers have started blooming. I took pictures, but the batteries in the camera need recharging and the spares need recharging, too. Can you believe?!?! as shown below. 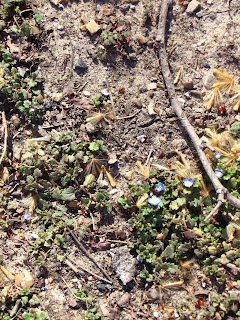 When I started this blog, I tried to blog every day. I missed a day or two, now and again, but nothing like the last month.

My friend and I are planning on running (more like walking, to tell the truth) a St. Patty's three mile run, soon. I need to get out and start preparing. Nothing like waiting until the last week or so, huh?

And... we plan to feast with former coworker friends, this week. I guess we'll have to do the run to get rid of some of the excess weight.

So, what's going on with you?

At least, flame is warm 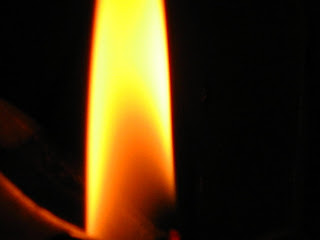 Forgive me. I haven't been visiting, nor posting much. It's been a rather depressing time...where is that groundhog? The weather turned bleak, again. Snow flurries and cold.... ick! The past week was pretty difficult on people, creatures, and vehicles on a couple major highways, nearby. I didn't really feel like hanging out at the computer... but I remind myself, at least I still can.

I did read a cute short story in the May 2007, Alfred Hitchcock's Mystery Magazine. Most, if not all the issue was great (including a story by my favorite, Jas R. Petrin!) but this story was most excellent. The story was called, Brimstone P.I., by Beverle Graves Myers, and had a great twist. The main characters were in hell. The devil had to get the private investigator to find out who was committing acts of good. The devil couldn't see the perp, because they were acts of good. 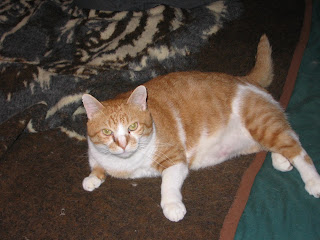 Mango was checking the Friday Cat Blogging Photos posted in the last month, or so, and reminded me that his picture hasn't been posted for a couple weeks.