I've had so many people ask, "Owl, haven't you painted anything, recently? How do you get your paintings to look so good?" Not. So, anyway, just because no one's asked doesn't mean I won't show how an Owl painting comes about. 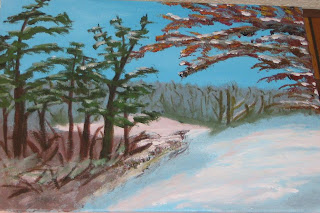 I started the painting about two weeks ago. The first step was to lay down some of the colors and an outline of sorts. The second step was this one. I laid down some more paint, then set it aside. Looking at it, I noticed that it looks like large rocks, right before the bunch of trees. I'll develop those a bit more, in the next step. 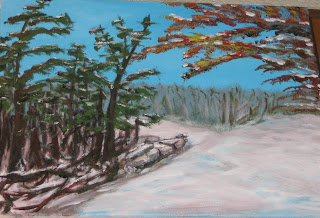 I was sitting around, watching television, when I decided I needed to add some paint. Here is step three. I worked on the rocks and the grounded tree trunks. 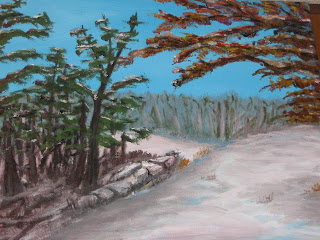 I was sitting around watching television, when I decided I really needed to add a little more detail. Here is step four. More work on the rocks and grounded tree trunks. Add more shaded areas, and work somewhat on the right side. 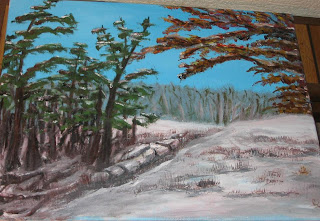 I needed to add some grass, or something to make that right side area look like something. Step five. I notice that those two trees in the background are too dark. I'll take care of that next time. 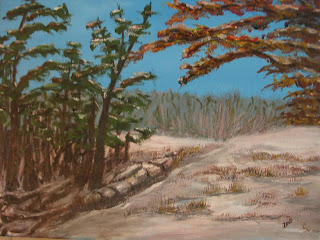 Well, that's about all I can think of. I don't want to spoil the painting by adding anything more, or trying to fix something that looks a bit strange. I'll call it snowymorningsomwhere. Heh:) 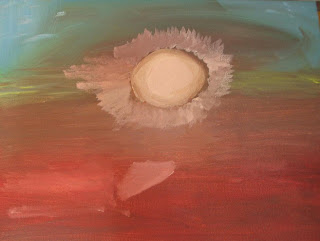 Now that I have that one finished, I need to start something new. This is the first pass on this canvas. I know I need to finish my sister's horse painting (I started last year) but I think I'll finish this one first, then get back to hers. I kind of like this one as it is, but it's not what it needs to be. 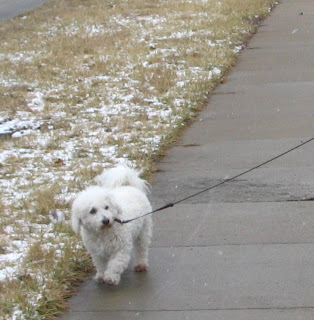 My kitties like to play strings, but they don't play the same way as this kitty. I took pictures so I could show them this new way. They scoffed, and stalked away. 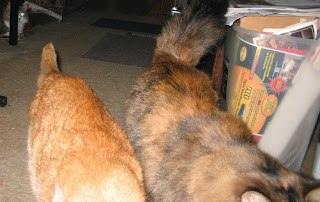 This is the reason I have to post pictures of other kitties.

So, Thursday morning, 10 degrees F, I went outside and started the car to defrost. So no one would steal the car, I locked it. I went back inside to finish getting ready for work. I figured enough time had passed, so I grabbed my backpack, my cup of coffee, and walked out the door. I always turn the lock as I depart. I pulled the door shut...and realized, I had not brought the other set of car keys...and the door keys were still inside. The set of keys, in the car, was the set that did not have a door key.

I walked over, and we chatted for a bit. We exchanged names, and he told me that he wasn't responsible for his keys being locked in the car. He said that he and his wife had recently bought the car, and only had one key. She had locked the key in the car, after starting it to defrost. Luckily, she was able to get a ride to work, and he was waiting for the locksmith. Soon, his locksmith arrived.

I walked back to my car, and about 10 seconds later, my locksmith came driving down the lane. My locksmith told me it would be much easier to unlock the car. I explained that I had keys, inside, to unlock the car, but I needed to get inside to get them. It was interesting watching him try to unlock the trailer door. Apparently, there are many easy ways to get inside, without resorting to the lockpicks. They didn't work with my door. For that, at least, I was happy. 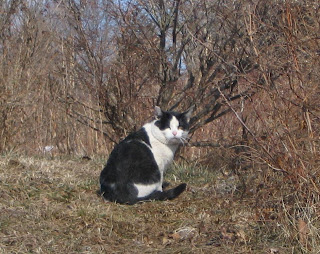 I took a walk this past Saturday. This kitty walked up the hill in front of me. What else could I do, but take a picture? The kitty sat and watched as I walked past, and took another picture. He's not still there, though. I walked that way, Sunday, and didn't see him. 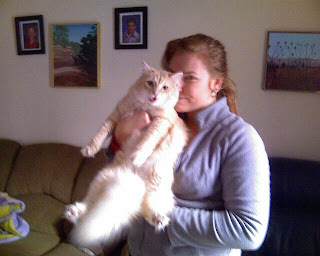 I believe the pretty cat's name is Werro. When I said, "say cheese", he said, "mouse", instead. If you look closely, you can see two paintings on the wall. I painted those, a couple years ago:) 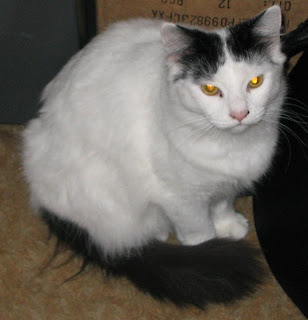 Does Parker Dmitri look angry to you? She does to me. I figure she should be happy. She gets cat food, water, cat treats, and sometimes even bits of chicken. She gets to sleep whenever she likes. She gets to bite the other cats, until they get up and go elsewhere. Sometimes she gets to play strings, too.

I guess she doesn't care for the flash of the camera. I probably wouldn't appreciate it, either - especially if I were a cat.