Friday Cat Blogging - What is she thinking? 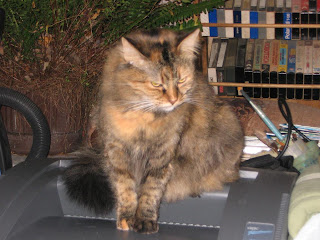 The expression on Rocky Girl's face mirrors mine.

This year has not been a good year, so far, for people near and dear to me. My best friend lost her husband, a couple weeks ago. A good friend, from a past job, lost his mother a couple weeks ago. A co-worker lost his grandmother, last week. Another co-worker lost one of his parents, last week. I just found out that one of my cousins died from a truck accident, this week. My father is in the hospital, and another cousin has been in the hospital for the past couple months. The only good part of it is that my father is in a skilled nursing wing, and he's not having to worry about going out in the nasty cold weather. 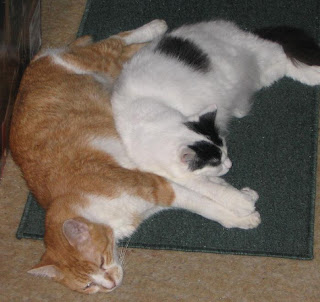 I always thought Rocky Girl was Sgt Mango's girlfriend. This is the second picture I've posted of Sgt Mango and Parker Dmitri in this pose. I'll say no more.

Hanging out at the airport.

What a crazy freaky day. I was supposed to catch a flight, around mid-day, and be away for a couple days. I made sure there was plenty of cat food, and water, for the four girls, and took Sgt Mango to his personal physician's office, to be boarded. I got to the airport, got my ticket, and sat. There were people milling about who were waiting to fly, from an earlier flight - 6:00AM was their flight time. The fog was so thick, that their flight kept getting delayed...and then, my flight got delayed...and delayed...and delayed. The people for the 6:00AM flight finally got to fly out around 2:00PM. Soon after, my flight was cancelled. I'd only been waiting for about five hours, but by that time, I had such a headache, all I wanted to do was go home. I called the vet's office, and told them I was on my way to pick up Sgt Mango. When I got there, Sgt Mango was in his carrier, ready to go. The young lady told me she noticed Sgt Mango still needed one shot. He got it, today. At least the trip wasn't wasted:) 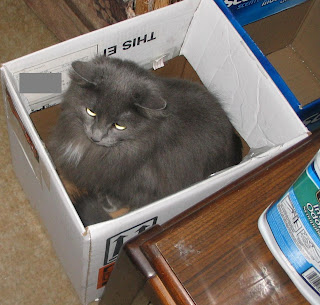 Grey Feather is ready to go. She said she was tired of the other cats getting all the attention. I had to tell her that she was staying here. The situation turned out okay.

I was going through some boxes to throw some stuff away, when I found this old photograph. It brought back memories of an incident that happened during those days.

Many years ago, my brother came to visit. His motorcycle was a hit with a neighbor girl, and she wanted to go for a ride with him. He agreed, so she hopped up in back and they took off. It so happened that a young punk lived catty-corner to my place. He had thrown a rock at his parents' car, and the mother called the police on him.

Back in those days, we always called the cops, "Johnny Law".

Johnny Law was giving the punk kid a high-powered lecture when my brother and neighbor came rolling back on the motorcycle. Johnny Law ran to the street and yelled, "you! Stop!"

My brother stopped, and Johnny Law asked for his driver's license. He handed it over, and was told to park, and wait.

Once Johnny Law finished lecturing the punk kid, he ran my brother's license through their system, then came over to where my brother was waiting. Johnny Law told him he had stopped them for not wearing helmits. However. There was a warrant out for my brother's arrest.

A year prior, my brother had gone to Six-Flags, and offered to smoke some weed with a girl. She called security on him, and they called the police. They told him they would send the weed off to the lab, and if it was, indeed, weed, they would send notification. Supposedly, they had sent him notification, but he never received it.

Johnny Law put the cuffs on him, and took him to jail. The banks were closed, so my sister and I went to the store to cash checks to get enough cash for the bondsman to bail him out of jail. Funny note - Some years later, I was going to night school, and this particular Johnny Law was in one of my classes.

Lessons learned:
1) Never offer to smoke weed with someone you don't know.
2) Never ride a motorcycle without a helmit.
3) Never live across the road from a punk kid that might cause the law to come over.

Speaking of...
I've been watching COPS reruns when they come on television. Most of the people the police stop seem to be carrying some sort of drugs.

1) If you have a crack pipe on you, don't run a stop sign - driving or biking.
2) When the cops ask you about the crack pipe, don't tell them you took it away from some kids - as if kids will just give you, a stranger, their pipe.
3) If you have a crack pipe, or drugs, in your purse, 'fess up that it's your purse, instead of telling them some story about how, "I don't know whose purse it is, it was in the car when I got in." They will find your ID in the purse.
4) Don't tell the cops that you got the car from some guy downtown, and don't know who the guy was - how many people are going to just give away a car?... besides Oprah, of course.
5) Don't tell the cops you don't know how that cocaine, weed, crack, etc., got in your car - especially if you're already wasted.
6) Don't start fights while drinking. Someone will most likely end up going to jail.
7) When you're being stopped by police, don't jump out of the car and start running. You'll probably be hit by a car, or the police will chase you down. They can find you in brush, around apartment buildings, stores, fences, and in the lake you forgot was there. 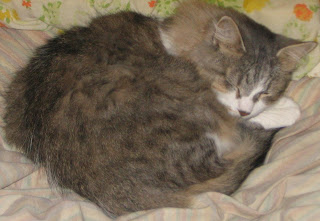 Lady Fortuna wants to keep warm, during these very cold winter days. She makes herself into a circle. It's better than being square:) 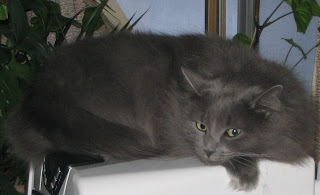 The kitties and I wish you a Happy New Year!

We hope your holiday is happy and safe. As always, check out the wonderful animal pictures linked for Friday Ark at The Modulator.